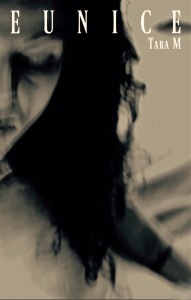 Blurb: Thaddeus was from Arae villa – it was a thorough mistake to get mixed up in the business of the noble classes.

When Eunice meets a nobleman who takes a liking to her, she makes sensible use of the opportunity to feed off his money. But when he must leave for affairs of war, his brother Demetrius kidnaps her, intrigued by her fiery unscrupulous nature so like his. Eunice finds herself conflicted between feelings of hate for him and a certain kinship of spirit. She reaches a crossroads, as she is forced to examine what she really wants from life beyond material things.

Setting: A fictional place inspired by the Roman period

This novel was inspired by a dream.

The cover was a pain to make, as I had to paste the letters individually and accidentally deleted my first draft … I’m mildly proud of the result though. It’s not anywhere near publishing-worthy but it’ll do for a working cover.

It seems like it would be a romance but all the relationships are pretty messed up. If you’re looking for a happy ending, this isn’t the right story.

Eunice is quite an unlikeable character. But she is one of my favorite female characters I’ve written. I like how flawed she is.

Eunice took it, “I’m much obliged.” She turned to leave and when her back was turned, the innkeeper gave a sigh of audible relief and some annoyance. It was not lost on Eunice.

She was a parasite.

And yet, somehow that was alright. She could live with being a parasite.

She had never been short on opportunity for introspection. There was the 10 days respite before she set off into the hell hole of the stormy outdoors. Now there was the three days journey. Before that, there had been hours upon end as she stitched hems and mended sleeves. So much time alone. It was something of a curse but mostly a blessing. She and her needle …. the needle might not have been an immensely interesting companion but at least there was no drama. She had complete control over it and she knew it would not turn against her, not unless she made it. It was predictable. It made sense.…

“Come, tell me your name,” he clearly took the opportunity. “Then I shall have something to call you.”

She frowned at him with her eyes, “Lucia,” she said automatically.

Never give your real name. Names are power. She stared defiantly at him. He just smiled back.

“That is my name.” He looked at her expectantly. “Fine. Eunice.” she said. “That’s my name. Are you happy?”